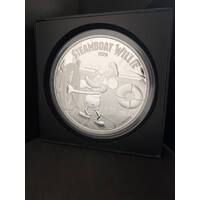 Steamboat Willie has been at the helm of Disney animation from the early days, steering it forward through the seas of imagination.

Released at the Colony Theatre in New York on November 18, 1928, Steamboat Willie was directed by Walt Disney and is considered the debut of Mickey Mouse.

Through the decades since its release, Steamboat Willie has received widespread critical acclaim, not only for introducing one of the worlds most popular cartoon characters, but for its innovation.

Steamboat Willie was selected for preservation in the United States National Film Registry in1998, being deemed culturally, historically, and aesthetically significant.

The coin face captures a still frame from the iconic scene where Mickey Mouse is seen cheerfully standing at the boats wheel. Wrapped around the top of the coin is the engraved name of this breakthrough cartoon, Steamboat Willie, and the year of its release, 1928.

The obverse of the coin features the Ian Rank-Broadley effigy of Her Majesty Queen Elizabeth II.

The coin is packaged in an illustrated box featuring Mickey Mouse and is accompanied by a numbered Certificate of Authenticity.