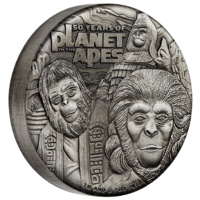 PLANET OF THE APES
50th ANNIVERSARY 2018 2oz SILVER ANTIQUED COIN
Official licensed product
50th anniversary design
99.99% pure silver
Tuvalu legal tender
Limited mintage – 2,000
Planet of the Apes themed packaging
Numbered Certificate of Authenticity
The Perth Mint is excited to release this Planet of the Apes 50th anniversary coin.
Released in 1968, Planet of the Apes is a ground-breaking movie which, in the tradition of great science fiction, reflects conflicts and questions in our own society.
The film tells the story of an astronaut crew which crash-lands on a dystopian planet in the year 3978, about two millennia after their departure on a near light-speed voyage. In a desolate landscape, the surviving crew members, led by Taylor (played by the late Hollywood star Charlton Heston), discover a society in which apes are the dominant species with human-like intelligence and speech. Organised in a strict caste system, the apes treat humans like vermin who are hunted to be killed, enslaved or used for experiments.
A critical and commercial success, the film won an Oscar for outstanding makeup.
The coin is struck by The Perth Mint from 2oz of 99.99% pure silver and issued as legal tender under the authority of the Government of Tuvalu.
The Perth Mint will release no more than 2,000 of the Planet of the Apes 50th Anniversary 2018 2oz Silver Antiqued Coin.
DESIGN
The coin’s reverse features Dr Zira in the foreground, Dr Zaius mid-ground and a hunt leader in the background. As well as The Perth Mint’s ‘P’ mintmark, the design also includes a depiction of the desert-like Ape City.
The coin’s obverse depicts the Ian Rank-Broadley effigy of Her Majesty Queen Elizabeth II, the monetary denomination, and the 2018 year-date.
The coin has been individually ‘antiqued’ to give it a unique finish conveying the surface abrasions of an ancient artefact. As a result of this treatment the appearance of each coin may vary.
PRESENTATION
Each coin is presented in a clear acrylic case, allowing both sides of the coin to be displayed, and is packaged within a themed shipper. The coin is accompanied by a numbered Certificate of Authenticity.