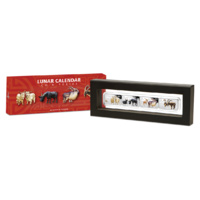 LUNAR CALENDAR SERIES
2015 YEAR OF THE GOAT
1oz SILVER RECTANGLE FOUR-COIN SET
Magnificent Year of the Goat tributes
Four 99.9% pure silver 1oz coins
Unique rectangle shape
Cook Islands legal tender
Extremely limited mintage
Numbered Certificate of Authenticity
Exciting packaging that displays the product
Four coins form a linked image
Celebrating the Year of the Goat, this four-coin set is a prestigious and exceptionally limited offering from The Perth Mint. Issued as legal tender under the authority of the Government of the Cook Islands, each rectangle coin is struck from 1oz of 99.9% pure silver in proof quality.
The birth dates for people ruled by the Chinese Lunar goat include 1919, 1931, 1943, 1955, 1967, 1979, 1991, 2003 and 2015. Those born under the influence of this sign are said to be elegant, charming, artistic, gifted and calm. The Perth Mint will release no more than 3,000 of the 2015 Year of the Goat 1oz Silver Proof Four-Coin Set.
DESIGNS
The reverse of each coin celebrates the 2015 Year of the Goat with a design to showcase one of four different coloured goats. The Chinese character for ‘goat’ and the inscription ‘Year of the Goat’ also appear in the design with The Perth Mint’s traditional ‘P’ mintmark.
The obverse of each coin depicts the Raphael Maklouf effigy Her Majesty Queen Elizabeth II, the 2015 year-date, and the monetary denomination.
PRESENTATION
Accompanied by a numbered Certificate of Authenticity, the four-coin set is housed in a contemporary black framed clear display case, allowing you to see both the reverse and obverse of each coin, and is packaged in an illustrated shipper.