2021 marks the 95th birthday of her Majesty Queen Elizabeth II. This incredible milestone is an opportunity to celebrate the sovereign’s remarkable longevity, her steady hand as Head of State, and her undiminished devotion to duty as she continues to carry out a program of royal engagements at a pace inconceivable to most people of her age.

Princess Elizabeth Alexandra Mary was born in London at 2:40am on 21 April 1926 to the Duke and Duchess of York, the second son of George V. She was christened one month later in the private chapel at Buckingham Palace. As the Duke and Duchess’s eldest daughter, Princess Elizabeth was third in line of succession. But when her father unexpectedly became king in 1936, 10-year-old Lilibet, as she was known within the Royal Family, became heir presumptive to the throne.

Each coin’s reverse portrays Mary Gillick’s popular effigy of a young Queen Elizabeth II. The portrait overlays a backdrop of stylised wattle surrounded by the inscriptions ‘H.M. QUEEN ELIZABETH II 21 APRIL 1926’. Also included in the design is The Perth Mint’s ‘P’ mintmark. The Jody Clark effigy of The Queen appears on the coin’s obverse, which also includes the coin’s weight, purity, monetary denomination and year-date.

Each gold coin is housed in a classic display case with a wooden lid. Packaged within an illustrated shipper, each coin is accompanied by a numbered Certificate of Authenticity. 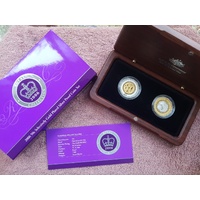