The quokka is a Western Australian icon that is strongly associated with Rottnest Island near Perth. The idyllic holiday location is home to thousands of quokkas which, in the age of social media, have become the subjects of must-have ‘selfies’. Small, wallaby-like creatures that are not intimidated by humans, they have a cute and smiley appearance.

Struck from 1oz of 99.99% pure silver, this coin portrays a quokka on a beach with a lighthouse in the background. Standing on its hind legs, the herbivorous marsupial is eating its preferred diet of leaves. Included in the design is the inscription QUOKKA and The Perth Mint’s ‘P’ mintmark.

Depicting the Jody Clark effigy of Her Majesty Queen Elizabeth II on its obverse, the coin is Issued as legal tender under the Australian Currency Act 1965.

This coin includes an authentication feature on the reverse in the form of a micro-laser engraved letter. Detectable under a magnifying glass, it is designed to make it significantly more difficult for the coin to be counterfeited.

These sealed rolls of 20 coins in capsules. 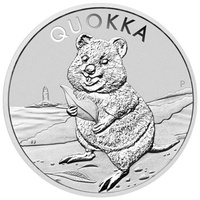 2021 Quokka Stamp and Coin Cover One Dollar $1 Per