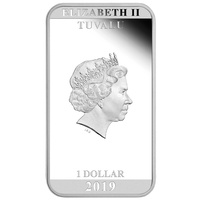 ALIEN 40th ANNIVERSARY 2019 1oz
SILVER PROOF COIN
Official licensed product
Celebrates the 40th anniversary of Alien
99.99% pure silver
Tuvalu legal tender
Limited mintage – 5,000
Numbered Certificate of Authenticity
In the pantheon of memorable movies, Alien is a true classic. Kick-starting a compelling series of science fiction horror features, the 1979 release confronted the worst imaginable scenario in space - being stalked and slain by an aggressive and terrifying extra-terrestrial.
Gripping and petrifying audiences worldwide, the groundbreaking movie ratcheted up the tension when the larval alien burst in shocking fashion from the chest of Kane, a crew member aboard the intergalactic freighter Nostromo.
The nerve-stretching tension inflicted on the rest of the ship’s complement (as well as movie goers!) was unrelenting from that point forward. The interstellar intruder developed into its mature and most hostile form - a skeletal creature with a disturbingly elongated cylindrical head and acid blood. Its malevolent jaws concealed an inner set of incisors which extended with vicious speed and power as a means of brutal attack.
Directed by Ridley Scott and starring Sigourney Weaver, Alien won a raft of honours, including Academy Award (Oscar) for Visual Effects.
DESIGN
Celebrating its significant impact on the genre and enduring appeal over four decades, this coin portrays the movie’s dark and forbidding movie poster.
Credited to graphic designers Philip Gips and Steve Frankfurt, the poster’s focal point is an egg which references the oval pods from which alien life first emerged in the presence of Nostromo’s landing party. Suspended over a shadowy lattice of calcified strands, the egg seeps sinister green-yellow light from a jagged crack in its side. The artwork includes the unforgettably ominous line: In space no one can hear you scream.
The coin’s obverse portrays the Ian Rank-Broadly effigy of Her Majesty Queen Elizabeth II, the monetary denomination, and the 2019 year-date.
PRESENTATION
The coin is housed in a clear latex display case with a black frame, packaged within a themed shipper and accompanied by a numbered Certificate of Authenticity.