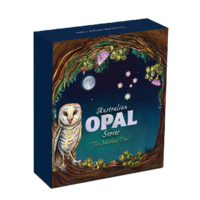 The beautiful Masked Owl inhabits tall trees with suitable hollows for nesting, roosting, and adjacent areas for foraging.  Masked Owls are territorial and pairs remain in or near their home all their lives.  This unique creature is nocturnal, with hunting taking place in the early hours of the night.

The sixth release in the Australian Opal Series features the beautiful Masked Owl, a highly distinctive bird, generally found in the coastal regions of mainland Australia and Tasmania.

This winsome creature is recognised by its brown feathers surrounding a white, heart-shaped mask.

Each coin is struck by The Perth Mint from 1oz of 99.9% pure silver in proof quality.

The reverse of this exceptional coin incorporates an inner panel design of an Australian Masked Owl sitting in a tree hollow detailed in pure Australian opal. The outer panel of the coin features eucalypt leaves, blossoms, native flowers and a Waning Gibbous moon. The Southern Cross – a renowned star constellation, only visible in the Southern hemisphere, is also depicted.

Issued as legal tender under the Australian Currency Act 1965, the coin’s obverse depicts the Ian Rank-Broadley effigy of Her Majesty Queen Elizabeth II and the monetary denomination.

The coin is presented in a prestigious display case with a light, which illuminates as you open the lid, to represent the moon shining down on the nocturnal creature. The coin is accompanied by a stunning illustrated shipper and a numbered Certificate of Authenticity.