The Perth Mint and Australia Post together present the second release in this adorable series featuring iconic baby animals.

The coin and stamp both feature the brush-tailed possum.  One of Australia's most familiar marsupials, this lively animal is the size of a domestic cat with a pointed face, long oval ears, a pink nose and a bushy black tail.

The coin’s reverse depicts an irresistible image of a baby possum. As well as The Perth Mint’s ‘P’ mintmark, the design features a friendly Australian insect and delicately frosted representations of Australian bush flowers.

Issued as Australian legal tender, the coin’s obverse depicts the Ian Rank-Broadley effigy of Her Majesty Queen Elizabeth II, the year-date and the monetary denomination.

Affixed to the envelope is an official Australia Post $6.45 stamp.  The stamp is postmarked with the first day of issue.

This uncirculated aluminium bronze coin is housed in a beautifully designed card that fits inside a similarly illustrated envelope with a circular window revealing the coin’s reverse and obverse designs.  The envelope also includes Australia Post’s Seal of Authenticity and official number. 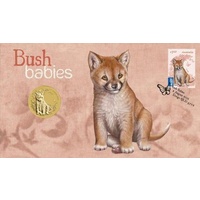